skip to main | skip to sidebar

US Blocks Websites it Dislikes

For several years, going back to 2019 that I know of, the Taliban had a website, alemarahenglish.net

Then the US noticed, and had the company that sold them the name alemarahenglish.net remove it from all nameservers, so if one tries to access the website, the web cannot find it. Every web address is a number having 4 to 12 digits called the Internet Protocol or IP address. Google is at 142.250.181.14

The US went to the owners of the nameservers that knew the name of the Taliban website and its IP address, a company called Tucows, and had Tucows remove the Taliban's name, alemarahenglish.net from the nameserver, so if one tries to connect, every web browser just says, 'We’re having trouble finding that site.' So no web brower can connect to the Taliban website. If I had saved the IP address, I could check, but it looked like the ISP hosting the Taliban website took the website down, so even if one knew the IP address, one still could not connect. (One typically buys the name for one's website from a company that sells names, and then finds another company to host one's website.)

The US tried to do that to Iran. Iran had a webserver, presstv.com

Iran had to buy the name presstv.com from a vendor outside Iran, and the US had the company that owns the nameserver that had the presstv.com name point to a US government webserver 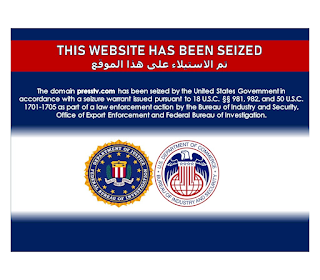 Sadly, the civil servant who funded the development of the Internet wanted it to be a tool that would allow the US military to communicate during a war with the USSR, when the USSR would be doing everything a superpower could do to block the US military from communicating.

So the Iranians put their news website on presstv.ir which has its own nameserver, and the US has been unable to block it.

Net: it would behove the Taliban to work with Iran, Russia, and/or the PRC, any of whom could get the Taliban website up and running in a day or so, and protected so the US cannot block it.

However, the Taliban were created by the US to make trouble for the USSR, and they are still designated terrorists under Russian law. Also, they are a sect of Islam that hates the Ayatollahs. And the CIA has been telling them lies about the PRC genocide of Muslims in Xinjiang. So it is not clear if they will be able to make friends with Iran, Russia, or the PRC, something they desperately need to do.

Before, when the Taliban ran Afghanistan from 1996 until 2001, only 3 countries gave them diplomatic recognition: Pakistan and 2 small Arab countries. They could not convince any other country to give them recognition or a seat at the UN. Of course, they were happy to live in the 7th century: if the Prophet did not have it, the Taliban's Afghanistan didn't need it. But that was 20 years ago, and the new and improved Taliban would like to live a little differently. For which they need other countries to recognise them and help them.

Russia and the PRC did not close their Embassies when the Taliban took over Afghanistan. The Russian Embassy is fully open, while the PRC had most of its staff return to the PRC but left a skeleton staff to keep the Embassy nominally open. Most European countries, and, of course, the US, closed their Embassies in Afghanistan.

So some of us are wondering in what direction Afghanistan will be going. And with whom.

Posted by FugitiveMe at 5:54 PM No comments:

12 US Marines and a Navy Medic killed. The US does not forgive. Or forget.

An ISIS-K (the K is for Khorasan, part of the Ancient Persian Empire that is now part of Iran, Afghanistan, Tajikistan, and Uzbekistan) suicide bomber has killed 13 US servicepersons, 12 Marines and a Navy medic (he also killed more than 60 Afghans, but they don't count). His ISIS-K name was Abdul Rehman Al-Loghri, with the al-Loghri meaning he was from the village of Loghman.

Since the US does not forgive or forget (according to President Biden, who has trouble remembering the names of the people who work for him) the US must drone some peasant farmers in Loghman, say that intelligence proves they were the members of ISIS-K that sponsored the attack, and justice has been served. (And if anyone hands out classified information that those ISIS-K terrorists the US killed included some babies, that person will be tracked down and gaoled for life, while the drone operators and their commanders will all get medals for Great Services Rendered, protecting the US from terrorists.)

President Biden says the US will stay another 4 days, so we might see more attacks, maybe with names like al-Kandahari or al-Herati, so more to drone.

Posted by FugitiveMe at 5:57 PM No comments:

Getting the heck out of Afghanistan

St Joe says he is doing the exit from Afghanistan perfectly. It would have been very difficult a month ago, it would be very difficult a month from now, so no matter when we left, it would have been exactly as it is now as long as he is the one directing the exit, and a lot worse if some else (meaning Trump) had been directing it, because he is doing it perfectly.

Fox News, of course, disagrees vehemently, of course, because they're Fox. So does Maureen Dowd of the New York Times, but she was condemned by all her readers: they all wrote that St Joe is doing it perfectly, and if she were doing it, it would be a lot worse.

Some ask, if the exit were always going to be so difficult, if there is absolutely no way anyone could possibly get all our people out, shouldn't we have stayed, the way we did in Germany and Japan after WWII?

St Joe says we had one job to do in Afghanistan, we got it done when we killed Osama, and there was no point wasting even one more US life (except for those we'll have to leave behind to be murdered by the terrorists, but there would never have been a way to save any of them, and lots more US soldiers would die if we stayed any longer).

The critics of St Joe do have a few flaws: he was warned that the Taliban could take over the entire country, making it very difficult to get all our people out, very soon after the end of August. But, of course, St Joe planned a massive evacuation, with the help of the Ghani government, before the end of August. No one believed the Taliban would take over on 15 August. All the warnings were that it might happen right after August (and St Joe said he didn't believe any of those warnings, he knew the Ghani government would last for years after the total US withdrawal).

And as St Joe says, we know we're going to have to leave a lot of people we promised to get out, but that we'll be leaving the fewest possible number because of his brilliant management of the evacuation, no one could possibly have left fewer behind that he will leave. And again, most New York Times readers figure he's telling the TRVTH, the whole TRVTH, and nothing but the TRVTH.

Sadly, most polls show the New York Times readers do not represent the majority of the voters, so the Democrats might have a teeny bit of trouble in the coming mid-terms, but the voters are likely to have forgotten Kabul by the next presidential election. And there's a very good chance St Joe will stand down about two months after the mid-terms, letting St Harris take over for the next 10 years.

Posted by FugitiveMe at 6:02 PM No comments:

As President Biden said, the legitimate Afghan government, the Islamic Republic of Afghanistan, has 300,000 well trained soldiers and an advanced air force, so the Taliban, about 75,000 guerilla fighters with primitive weapons, could not possibly pose a threat.

The Western Press still calls the Mujahideen the Taliban, so I guess they could call that land that led the military that occupied their country for 20 years the Aggressors, and always refer to them that way: after all, your name for someone from a different ethnic group is much better than what they call themselves.

The Western media love to demonise the Mujahideen. I guess, if I know Joe and Sam are fighting, and Joe is from my ethnic group, I gotta listen to Joe's side of it and figure it's all that evil Sam's fault. Of course, I could listen to both sides. Nah. Why listen to anyone not from my own ethnic group?

However, the Mujahideen have their own website, so one can read their side of it. Maybe. Their website was down for a couple of days, but now it's back up. The US bragged about taking down the Persian Press site, so they might have blocked the website, or it might be that their webmaster is somewhat lacking in the requisite skills needed to keep the website up (or that their finances are limited).

Their own website presents them as very different from how they're presented by the Western press. Of course, they might be lying on their website, but the Western Press has a habit of lying ever since the Spanish-American War, when the newspapers promised, 'We'll provide the War!' and then they did. So I figure I've got massive evidence that the Western press lies, and no evidence one way or the other about the Mujahideen website. So, for now, I think I'll give more credence to the Mujahideen website than to the Western Press.

FugitiveMe
My wife in the US was having sex with another man, so, under the Clinton Law, the divorce judge had to sentence me to Life at Hard Labour without Parole (to keep my wife's boyfriend safe). Six lawyers told me there was nothing I could do, I was definitely going to gaol, so I went on the lam, and here I am.